On Oct. 1, Minnesota will join the ranks of nearly every other state in offering license plates that honor members of the military killed in the line of duty.

The "Gold Star Family" plates will be available free of charge to any surviving spouse or parent of a soldier who has died.

The plates were authorized by the legislature earlier this year in a law that called for them to be issued beginning Oct. 1.

Forty states already issue the commemorative plates and Minnesota is among seven where legislation has authorized them, but they haven't yet been issued.

The Gold Star families organization dates to World War I as a way to honor service members killed during that war. Subsequently, in 1928, a group of twenty-five mothers living in Washington, DC, created a national non-profit organization they called the American Gold Star Mothers, Inc.

The organization was named after the gold star families hung in their windows in honor of the deceased veteran. According to the group's history, "we stand tall and proud by honoring our children, assisting our veterans, supporting our nation, and healing with each other."

The cost of producing the plates will be paid for out of the "Support Our Troops" license plate account, which is funded by a $30 annual contribution that vehicle owners pay to display that slogan on their plates.
Posted by Doug Bley at 7:08 PM

I heard that they took first place in the National competition this year for Honor Guard teams. Congratulations to the team!!!!

We have seen them in action too often over the last few months and it is an impressive site to behold.

I wanted to write and let you know about the "Above and Beyond" mission a couple of your Patriot Riders did for us.
John R. Comer from the NE Metro came up yesterday from the cities by himself on his bike. We weren't home on Monday when he and his wife came by. He dropped off pictures he took at the Ogden, UT Patriot Guard get together (GOTG) of all the flags and informed us he was the one who sponsored the flag for Chad.
He had a picture of the flag with his info on there with the mountains in the background. They are all so beautiful, I dont know how they found Chads flag amongst all those flags. We are totally blown away with his thoughtfullness that he would come all the way up to our place to bring us these pictures to let us know he was the sponsor. He said he will mail us the flag when he gets it. All of you have done so much for the families and all of you have gone way beyond anything our family could ever ask for.
As he told us he did participate on the line at Chad's funeral. I was sad I didn't remember him being there, but I dont remember much those first two weeks. I wanted to share this story for you to share, and thanks aren't enough from us to you. I just had to let you know about the wonderful thing this man did in Chads memory.

Bless you all for all you do.
Deb Allen
THE MOMMA ALLEN
(Sgt Chad Allen - Iraq)
Posted by Doug Bley at 6:49 AM

Join us for the Northern Region Meet & Greet, done in conjunction with the Camp Ripley Open House. Camp Ripley is pumped about the day, and quite a few will be joining us on the ride. Alot of planning has gone into making this a family friendly memorable day.

We will be attempting to establish the World's Longest US Flag Line in honor of our soldiers and we have flags for kids and others who don't bring one. Camp Ripley has several things going on as part of their Open House and will have helicopters taking pictures of the Flag Line - they also have other suprises lined up. The Museum will be open, and if you haven't seen it, you will be in for a treat. Cody James is coming up to sing some songs for entertainment.

The Ride leaves at 10:00 a.m. from the Pillager High School (south side of hwy 210). Cost is 10:00 per person, and proceeds will benefit the Military Museum at Camp, as well as other projects that Camp has that recieves no funding, such as the US/Norwegian Military Exchange Program. Registration starts at 8:30 a.m., and there is a suprise ending on the ride. Once on post, riders will ride down Infantry Road, loop around and park on both sides of the road to establish part of the flag line. Flag line will be counted, so bring chairs if needed! Camp has set aside close areas for handicap accessiblity and elderly who wish to participate. Camp, without request, waived the requirements for helmets and other gear normally required to enter post. If you are not riding, please meet at the Canteen right outside Camp Ripley no later than 11:00 a.m.

Come join us for a FUN day!!

Members of the MN Patriot Guard After much hard work the final reports were filed for our business year of 2008 in August. As a 501(c)3 charity we are held to a strict standard of reporting. It was complicated tremendously this last year by new government rules of how to account for our financials, donations, and expenses. Special thank to Marge Boisvert (our Treasurer) and the CPA firm Carlson Advisers for the donation of a lot of time. The fees we are charged for our financial audit do not cover the total investment of time in any way!
Before we dig into the numbers I’d like to say that being a 501(c)3 charity takes a lot of work. The nice thing is that all donations are tax deductible which helps motivate people to donate. The administrative effort to maintain it is pretty large though. As other states ask me about filing for non-profit status I warn them to talk to a good accountant before they talk to a lawyer.
In summary we generated $101,788.86 of revenue; $ 80,160.14 of donations, grants, and expenses $ 21,628.72 of net profit. I am putting a more detailed look at this break down at the bottom of this post. Sorry for the small size… I can’t figure out how to increase the size of the graphic! If you click on it it will open as a picture.
One key area that people use to evaluate the effectiveness of a non-profit is comparing administrative expenses to the overall expenses. Our ratio is an incredibly low 4% when the Charities Review Council considers 30% acceptable. They also state that you should have in reserve no more than three years operating funds available and we are in the range of 1.5 years. We will be filing for certification by the Charities Review Council to further assure everyone we have complete transparency in our accounting. One of financial policies was to have at least one year expenses in reserve in case our fundraising went away completely. The Board of Directors continues to monitor this for both compliance and if there should be changes to it. We are not a fundraising organization. We are an organization that believes we help by doing something with our “hearts and hands.” That said we have the ability to help at times with funds and we will continue to guard that we do not become focused on raising money.
I'd like to explain a couple of specific items...
Promotions to the American Legions/VFW's were donating non current T Shirts and DVD's to help promote the MN Patriot Guard mission and purpose and mission. Each sector was given these to pass out as needed.
Mission expenses were items such as replacements radios and batteries, Law Enforcement Charges if they were needed, printing, and other items such as that.
The Safety Training class was made possible by our friends from ABATE. In 2006 ABATE donated funds to use for mission bussing that you as members didn't really want. As we had leftover funds in that account we asked if we could use it for Accident Scene Management training classes for the sector leaders. They were gracious enough to allow us to do that. Thank you ABATE.
Hopefully the government won’t change the reporting rules again or 2009 so that we can more timely make this report to you. We want to ensure all the documentation is correct before we make information like this public. 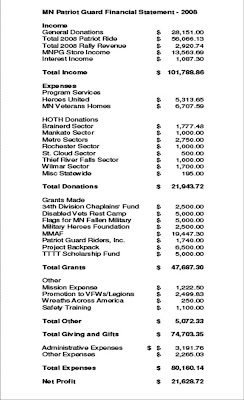 The DOD just released the notice about SSG Todd W. Selge of Burnsville, MN. The Leadership Team has contacted the Army and we are working through channels with the CAO on this possible mission. Please don't attempt to contact the family, funeral home, church or LEO in an attempt to help us. Your help may cause us to NOT be invited to honor this American Hero.

We ask that you keep the Selge family in your prayer during this difficult time.

George
Posted by George at 4:39 PM