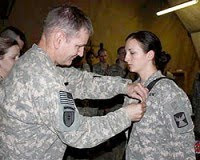 Colonel Salzman of the Contingency Operating Base in Basrah, Iraq, awarded Spc. Sarah O’Loughlin with the Army Achievement Medal for her efforts in organizing an Irish Scamper for military personnel.
O'Loughlin honored for International Irish Scamper

This year's Irish Scamper during Maple Lake's St. Patrick's Day Festival made history when a sister race was held in Iraq. And now its organizer has been honored for her efforts.

Spc. Sarah O'Loughlin, daughter of Mike and Ginger O'Loughlin of Maple Lake, was awarded with the Army Achievement Medal earlier this month at a ceremony at her base in Basrah, Iraq.

O'Loughlin had been a past participant in the Irish Scamper and organized an Iraq event that drew 236 service men and women to participate in the 5K race. O'Loughlin actually had 288 people sign up for the race she organized, but some were unable to particpate due to missions or other duties.

O'Loughlin's parents conducted fundraising in Maple Lake to provide race t-shirts for the first 200 runners to sign up, with the Maple Lake Lions donating money to ship the shirts to Iraq.

"I am very happy to have been recognized for all the work put into the run, mostly because I feel like it helps recognize all the people back home who helped me with it," she said. "A lot of work went into making the whole thing happen, and I am so grateful for everyone who helped me."

O'Loughlin will return stateside from her tour of duty in Iraq in late June or early July.
Posted by Doug Bley at 12:26 AM