Happy Spring!!!  Maybe.. hopefully...  any day now!
To our friends in the Red River Valley we are hoping that things work out Ok from the flooding.  We know they are tough days and hopefully things get back to normal soon.
Below is our activity in March 2009.
One thing not listed on here is a donation we made to an important group.  The "Dear American Hero" cards have found their way into our organization since I have been around.  I have handed them out to to military members literally around the world.  Thanks to Ron Reineke we found out that Dick Glasgow lost his sponsorship of the printing.  With that the Minnesota Patriot Guard made a donation to him to help keep the cards being printed.  If you have been a recipient of these cars please consider helping Dick out with a small donation of your own.
On a serious note.  John "Indian" Thompson has been challenged seriously with some health issues.  John recently underwent brain surgery and every report we have received is very positive.  Respecting his privacy means that John "Knee Cap" "Finigan" Foster can't say everything he knows.  Indian John resigned his RC position in order  to focus on his health and I personally want to thank John for his service.  There have been few members as dedicated as he.  See ya back soon on the flag line IJ!
Posted by Doug Bley at 10:11 PM

Patriot Guard Riders is a non-political organization and this event is not the kind of thing we would advertise to our members, as our members come from all over the political spectrum. In addition, taking political stances as an organization (or even appearing to) could have a negative impact on our relationship with the DoD, and as such, could hurt our mission.

Can I wear my Patriot Guard gear to the TEA Party? As to whether or not you should wear any Patriot Guard gear there, you own those items that you purchased, and so you are free to do with them as you please. All we have ever asked of members is that they think about what they are representing when they wear that name or symbol, and the hard work and dedication of tens of thousands of patriots (including you!) across the country coming together to honor our country's heroes. Personally, I don't think wearing it to a political rally helps further our mission in any way, so I won't be wearing any PGR gear while I'm attending the TEA Party. I wouldn't want the media to claim PGR was supporting the TEA Parties and show my vest on the 6 and 10 o'clock news.

George
Posted by George at 3:42 PM 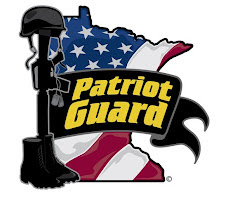